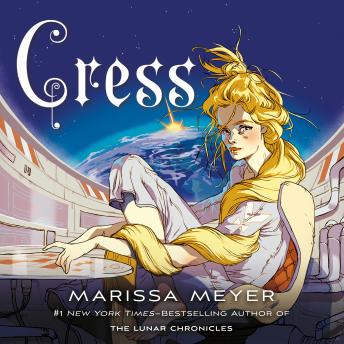 #3 of The Lunar Chronicles

In this third book in Marissa Meyer's bestselling Lunar Chronicles series, Cinder and Captain Thorne are fugitives on the run, now with Scarlet and Wolf in tow. Together, they're plotting to overthrow Queen Levana and prevent her army from invading Earth.

Their best hope lies with Cress, a girl trapped on a satellite since childhood who's only ever had her netscreens as company. All that screen time has made Cress an excellent hacker. Unfortunately, she's being forced to work for Queen Levana, and she's just received orders to track down Cinder and her handsome accomplice.

When a daring rescue of Cress goes awry, the group is splintered. Cress finally has her freedom, but it comes at a higher price than she'd ever expected. Meanwhile, Queen Levana will let nothing prevent her marriage to Emperor Kai, especially the cyborg mechanic. Cress, Scarlet, and Cinder may not have signed up to save the world, but they may be the only hope the world has.

love the lunar chronicles. such a creative twist on the characters we all know n love. didn't think I'd like this series, n couldn't get into it the first time I tried. but I honestly didn't give it a real chance. but once I stopped thinking of the traditional Disney princesses and stories and detached myself from those stories or the "once upon a time" tv series and just listened as if I didn't know it was post to be Cinderella n the other characters I was easily pulled into and intrigued by the story. so happy I gave it a real try. love these books.

Favorite of the series. Captain Thorne is my favorite side character, and you get so much odd him in this book. Bravo!

Love it thank you so much for this book. I love how these characters in this book are so made for each other and we know the love was perfect.

Genuinely another great book to listen too! The characters are very well written, and the world they love in just keeps getting more intriguing! Narrator was very good, a solid 9/10 right there!

Didn't expect this twists in this book, was an enjoyable surprise. This series keeps getting better and better.

The adventures continues.... but yet seems to be just starting. Love the sci-fi twist to my favorite childhood princess.

I love the Lunar chronicles series, but i do not enjoy Cress as much as the other book in the series.

love this series, I can't stop listening to them one after another

You will want to find a spot where no one will bother you so you can listen to this book in one day. Its fantastic