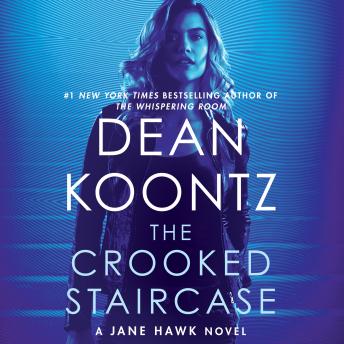 NEW YORK TIMES BESTSELLER • Jane Hawk—who dazzled readers in The Silent Corner and The Whispering Room—faces the fight of her life, against the threat of a lifetime, in this electrifying thriller by #1 New York Times bestselling suspense master Dean Koontz.

“I could be dead tomorrow. Or something worse than dead.”

Jane Hawk knows she may be living on borrowed time. But as long as she’s breathing, she’ll never cease her one-woman war against the terrifying conspiracy that threatens the freedom—and free will—of millions. Battling the strange epidemic of murder-suicides that claimed Jane’s husband, and is escalating across the country, has made the rogue FBI agent a wanted fugitive, relentlessly hunted not only by the government but by the secret cabal behind the plot. Deploying every resource their malign nexus of power and technology commands, Jane’s enemies are determined to see her dead . . . or make her wish she was.

Jane’s ruthless pursuers can’t stop her from drawing a bead on her prey: a cunning man with connections in high places, a twisted soul of unspeakable depths with an army of professional killers on call. Propelled by her righteous fury and implacable insistence on justice, Jane will make her way from southern Southern California to the snow-swept slopes of Lake Tahoe to confront head-on the lethal forces arrayed against her. But nothing can prepare her for the chilling truth that awaits when she descends the crooked staircase to the dark and dreadful place where her long nightmare was born.

Praise for The Crooked Staircase

“An absorbing thriller full of fresh touches . . . Writing his unusual heroine, Koontz keeps the pages alive with attitude as well as action. . . . For Hawk, who is as fearless as she is beautiful, no obstacle is too great, especially with the well-being of her hidden-away five-year-old son on her mind.”—Kirkus Reviews

“Spellbinding . . . Beautifully plotted and written with notable care and flare . . . The Hawk series . . . is among [Koontz’s] best work.”—Booklist (starred review)

very disappointed that it cut off in what felt like the climax of the story without resolving anything. Feels like part 1 of a multi part story. Left me hanging.

I am enjoying this series so much! I am on the edge of my recliner! Never a dull no with Jane Hawk! Susan Bordemos

I really enjoy this series. The plot has a lot of twists and suspense. The narrator does an excellent job of depicting the characters as separate people/personalities

I love the author and how he is able to transport you as an Invisible observer into his storytelling. The Jane Hawk novels are amazingly thrilling and you are taken on an amazingly, exciting ride into Jane’s world.

amazing book. wow it is getting better. brilliant

A decent addition to this series. Still captivating & a good middle book from which to build the ending from.

It just drags on. With little added to the entire story. Felt like an excuse to add a book to tbe series

What a great book! Lots of creepy DK stuff, just the way I like it!!

Absolutely love the Jane Hawk series excited for the new release in a few days! Dean Koontz is a favorite of mine. Also if you're going to leave a bad review at least use the right word...

Loved it. Lots of twists