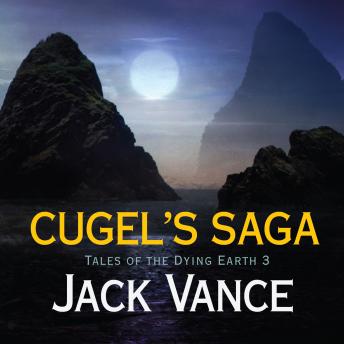 #3 of Tales of the Dying Earth

'Vance sees himself in the tradition of popular fantasy writers, but his classic writing style is also comparagle to Homer’s Odyssey, and Cervante's Don Quixote. Though the Cugel tales may lack the scope and pathos of the greatest adventure yarns, in the twenty-first century, they may be as close as one gets to the celebration of epic human perseverance.'--editor, Brilliance Audio

Cugel’s Saga, published 17 years after Eyes of the Overworld, is the second novel that features the scoundrel and trickster, Cugel. Again, Cugel tests wits with Iucounu and acquires rudimentary powers himself.

“Cugel the Clever [is] a rogue so venal and unscrupulous that that he makes Harry Flashman look like Dudley Do-Right. How could you not love a guy like that? .... Judging from the number of times that Cugel has come back ... you can’t keep a bad man down.” —George R.R. Martin, author of A Song of Ice and Fire.

“Cugel the Clever [is] a liar and thief in a doomed world of liars and thieves.... Probably the least attractive hero it would be possible to find, struggling through a universe like a Hieronymus Bosch painting, a hero only in that nearly everybody else he encounters in that universe is on the make too, and yet the Cugel stories are howlingly funny.” —Kage Baker, author of Empress of Mars.

This title is due for release on April 15, 2010
We'll send you an email as soon as it is available!