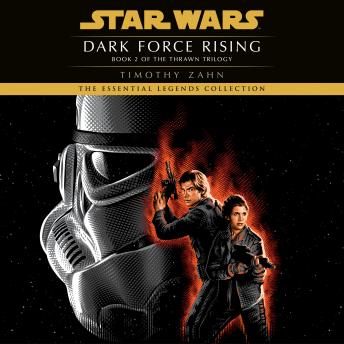 In this essential Star Wars Legends novel, the sequel to Heir to the Empire, Grand Admiral Thrawn’s sinister plan threatens to spell doom for the fledgling New Republic and its most iconic heroes.

The dying Empire’s most cunning and ruthless warlord, Grand Admiral Thrawn, has taken command of the remnants of the Imperial Fleet and launched a massive campaign aimed at the New Republic’s destruction. Meanwhile, Han Solo and Lando Calrissian race against time to find proof of treason inside the highest Republic Council—only to discover instead a ghostly fleet of warships that could bring doom to their friends and victory to their enemies.

Yet most dangerous of all is a new Dark Jedi, risen from the ashes of a shrouded past, consumed by bitterness, and scheming to corrupt Luke Skywalker to the dark side.

It's a decent book. I enjoyed the story. There are developing relationships between Luke and Mara, and Thrawn and C'Baoth that are interesting. I find myself pulling for Thrawn

Loved it. Disney missed not making movies of these

I'm beyond impressed with this series. Timothy Zahn has captured the excitement, feel, and tempo of the Original Trilogy we all love. Our characters come to life in a brand new adventure that keeps the reader wanting more. Marc Thompson is a fantastic narrator who does an excellent job with each character's unique voice. He makes the words truly come to life. Don't look any further, just download it and see for yourself!

This is a production! It sounds like and feels like a 10 hour long radio drama. The story line is top notch as all Zahn Star Wars is, and Thompson brings it to life.

I love this series! My kids got me hooked on it for my long commutes. Much more interesting than the news!

this book is great and the narrator is also great. I'm enjoying this series a lot. it's way better then the first 3 movies.

Fantastic! A wonderful book to listen to Marc Thompson is a truly gifted narrator!

I new to all of this audio book reading but the author made an incredible book and the crew did a fantastic job.

This title is due for release on June 26, 2012
We'll send you an email as soon as it is available!