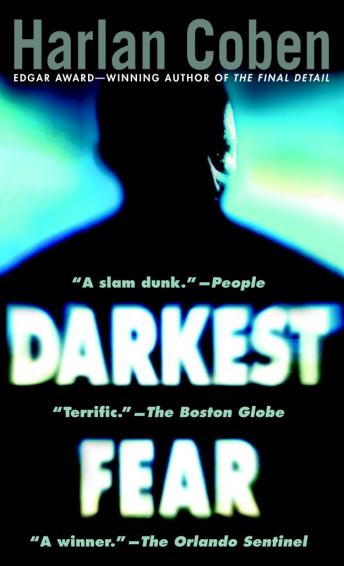 Edgar Award-winner Harlan Coben is at his electrifying best in his latest novel--a dazzling tale of seething mystery and dark family secrets.  In Darkest Fear, Myron Bolitar faces the most emotionally shattering case of his career.  And it all begins when Myron's ex-girlfriend tells him he is a father--of a dying thirteen-year-old boy....

Myron's sports agency is struggling.  Now more than ever Myron needs to keep his eye on the ball, sign up some big-name clients, and turn away from the amateur detective work that is taking precious time away from the agency.  But life is not going according to plan.  Myron's father, recently recovered from a heart attack, is facing his own mortality--and forcing Myron to face it too.  Then comes another surprise.

Emily Downing, Myron's college sweetheart, reappears in his life with devastating news:  Her thirteen-year-old son Jeremy is gravely ill and can be saved only by a bone-marrow transplant--from a donor who has vanished without a trace.  And before Myron can absorb this revelation, Emily hits him with an even bigger shocker:  Jeremy is Myron's son, conceived the night before Emily's wedding to another man.

Staggered by the news, Myron plunges into a search for the missing donor.  But for Myron, finding the only person in the world who can save a boy's life means cracking open a mystery as dark as it is heartbreaking--a mystery that involves a broken family, a brutal kidnapping spree, and a cat-and-mouse game between an ambitious reporter and the FBI.

Somewhere in the sordid mess is the man who once signed his name to a bone-marrow donor's registry, then disappeared.  And as doubts emerge about Jeremy's true paternity, a child vanishes, igniting a chain reaction of truth and revelation that will change everyone's life forever.

At once a riveting mystery and a spellbinding journey into the secrets that haunt families, lovers, and friends, Darkest Fear proves once again that Harlan Coben is a master storyteller like no other--and one of the most original talents in suspense fiction today.