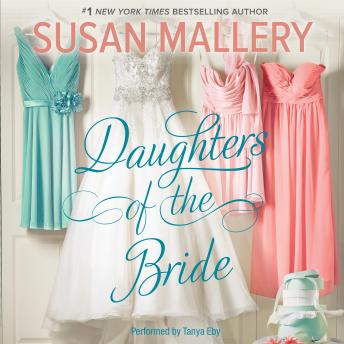 Daughters of the Bride

With Joy, Love and a Little Trepidation, Courtney, Sienna and Rachel Invite You to the Most Emotional Wedding of the Year…Their Mother's

As the awkward one, Courtney Watson may not be as together as her sisters, but she excels at one thing—keeping secrets, including her white-hot affair with a sexy music producer. Planning Mom's wedding exposes her startling hidden life, changing her family's view of her—and how she views herself—forever.

When Sienna's boyfriend proposes—in front of her mom and sisters, for crying out loud—he takes her by surprise. She already has two broken engagements under her belt. Should she say "I do" even if she's not sure she does?

Rachel thought love would last forever…right up until her divorce. As Mom's wedding day draws near and her ex begs for a second chance, she's forced to acknowledge some uncomfortable truths about why her marriage failed, and decide if she'll let pride stand in the way of her own happily-ever-after.

A must-read for anyone who has survived the wedding of a sister, a mother, a daughter—as told by the master storyteller of the genre.

Daughters of the Bride

This title is due for release on July 12, 2016
We'll send you an email as soon as it is available!