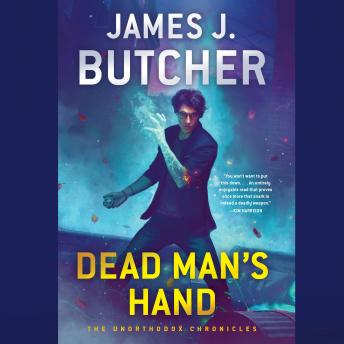 #1 of The Unorthodox Chronicles

In the tradition of his renowned father, James J. Butcher’s debut novel is a brilliant urban fantasy about a young man who must throw out the magical rule book to solve the murder of his former mentor.

On the streets of Boston, the world is divided into the ordinary Usuals, and the paranormal Unorthodox. And in the Department of Unorthodox Affairs, the Auditors are the magical elite, government-sanctioned witches with spells at their command and all the power and prestige that comes with it. Grimshaw Griswald Grimsby is…not one of those witches.

After flunking out of the Auditor training program and being dismissed as “not Department material,” Grimsby tried to resign himself to life as a mediocre witch. But he can’t help hoping he’ll somehow, someway, get another chance to prove his skill. That opportunity comes with a price when his former mentor, aka the most dangerous witch alive, is murdered down the street from where he works, and Grimsby is the Auditors’ number one suspect.

Proving his innocence will require more than a little legwork, and after forming a strange alliance with the retired legend known as the Huntsman and a mysterious being from Elsewhere, Grimsby is abruptly thrown into a life of adventure, whether he wants it or not. Now all he has to do is find the real killer, avoid the Auditors on his trail, and most importantly, stay alive.

I found James because I enjoyed his father's books, and I'm glad to have an incredible new author to add to my list. He gives both humor and drama in generous portions. Great worldbuilding alongside great storytelling. I can't wait for the next Grimsby book!

This title is due for release on October 11, 2022
We'll send you an email as soon as it is available!