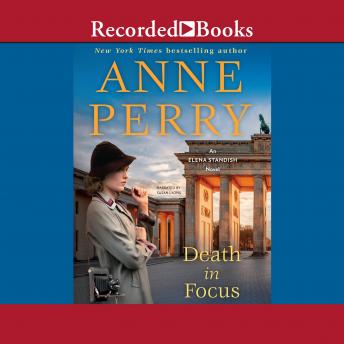 In the start of an all-new mystery series set in pre-World War II Europe, an intrepid young photographer carries her imperiled lover's final, urgent message into the heart of Berlin as Hitler ascends to power. On vacation from London on the beautiful Italian coast, twenty-eight-year-old Elena Standish and her older sister Margot have finally been able to forget some of the lasting trauma of the Great War. Touring with her camera in hand, Elena has found new inspiration in the striking Italian landscape, and she's met an equally striking man named Ian. Not ready to part from one another, she and Ian share a train trip home to England. But a shocking murder disrupts their agenda, forcing Elena to personally deliver a message to Berlin that could change the fate of Europe. Back home, Elena's diplomat father and secretive grandfather--the former head of MI6, unbeknownst to his family--are involved in their own international machinations. Working behind the scenes as Elena tries to complete her mission on the ground, they interfere with a crucial political rally for one of Germany's most outspoken fascists. With Adolf Hitler and the Third Reich on the rise, and Elena caught in the middle of an international incident, anyone she encounters might be part of a deadly plot. In the first novel of a riveting new series by bestselling author Anne Perry, family secrets merge with suspense on the world stage, and Elena learns that, in these complicated times, no one can be trusted, and she must learn to rely only on herself.