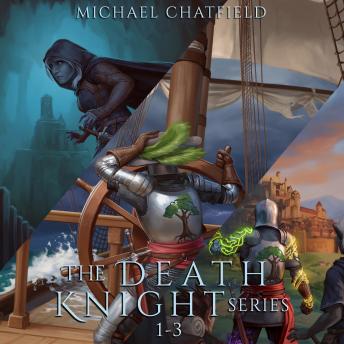 Anthony died in a war forgotten, removed from the history books. And then. Someone had the audacity to wake him up from his nap! Is nothing sacred anymore?


Aila Wranoris is a princess of the Underdark in the Northern reaches of the Stoha Mountains. The Dark Elves have remained out of the war that has ground to a halt between the Humans and the Beast-Kin. Now, in their research they have found signs of mysterious 'doorways'. She is sent to the Deepwood in the South, between the lands of Radal in the West held by the humans and Selenus in the East, controlled by the Beast-Kin.


Waking up a century old Guardian was not what she was expecting. How can an undead death knight also be a judge? Certainly not like any judge she knows. This one looks like he might have hit his skull a few times... He certainly didn't remember a mage turning him into an animated skeleton. Or why he has several spirit familiars at his command.


Their adventure has only begun. With all of Dena in peril, and a fragile ceasefire between man and beast in jeopardy, will an accident prone Undead with a serious case of amnesia and a Dark Elf his unfortunate travel companion be able to save them from an old enemy? Will Aila be able to survive his constant litany of jokes?

Tommie, Anthony and Aila have a new quest, to head across Dena to the Island nation Ilsal.


There the might learn more of Anthony's past and recover his lost power. Getting there.. well that's half the adventure, and something is working in Dena's shadow.


A Guardian's work is rarely done, at least this one doesn't need to sleep.

This title is due for release on October 16, 2019
We'll send you an email as soon as it is available!