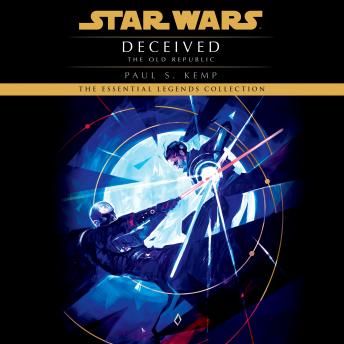 The second novel set in the Old Republic era and based on the massively multiplayer online game Star Wars®: The Old Republic™ ramps up the action and brings readers face-to-face for the first time with a Sith warrior to rival the most sinister of the Order’s Dark Lords—Darth Malgus, the mysterious, masked Sith of the wildly popular “Deceived” and “Hope” game trailers.

Malgus brought down the Jedi Temple on Coruscant in a brutal assault that shocked the galaxy. But if war crowned him the darkest of Sith heroes, peace would transform him into something far more heinous—something Malgus would never want to be, but cannot stop, any more than he can stop the rogue Jedi fast approaching.

Her name is Aryn Leneer—and the lone Knight that Malgus cut down in the fierce battle for the Jedi Temple was her Master. And now she’s going to find out what happened to him, even if it means breaking every rule in the book.

phenomenal so well written. Another Star Wars masterpiece. Malgus is such a boss.

This book was good. Just what you'd expect from the StarWars series.

I loved it!! they narrator was great the book was insanely good

What a great story line. Gives a different view of the Sith than other Star Wars books. Great ending to a well read story

Very good, I could listen to this all day, love the storyline

The story was good, I was hoping it would be a sequel with Darth Regan. Little disappointment there, but other that that, it was entertaining.

I was unhappy with Sith Lords by Kemp so I was a little worried coming into this book, but man was I pleasantly surprised! This book is incredibly good. I can't recommend this book highly enough.

I loved this book from start to finish. I want to know more about The Old Republic.

Absolutely love the Old Republic! Malgus is such a complex Sith compared to the order as a whole!

a good story. sometimes got lost with all the characters names and the silly female voices

Perfect. I’ve listened to most of the Star Wars Legends novels, this book really captures the nature of the sith, the struggle of light and dark, and the love for family. MUST READ.

This title is due for release on March 22, 2011
We'll send you an email as soon as it is available!