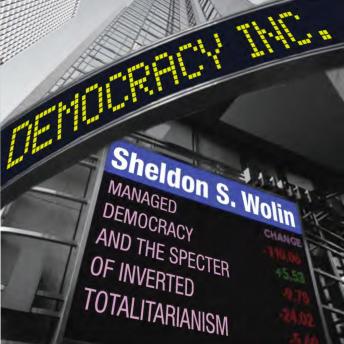 Democracy Incorporated: Managed Democracy and the Specter of Inverted Totalitarianism

Democracy is struggling in America — by now this statement is almost cliche. But what if the country is no longer a democracy at all? In Democracy Incorporated, Sheldon Wolin considers the unthinkable: has America unwittingly morphed into a new and strange kind of political hybrid, one where economic and state powers are conjoined and virtually unbridled? Can the nation check its descent into what the author terms 'inverted totalitarianism'?

Wolin portrays a country where citizens are politically uninterested and submissive - and where elites are eager to keep them that way. At best the nation has become a 'managed democracy' in which the public is sheperded, not sovereign. At worst it is a place where corporate power no longer answers to state controls. Wolin makes clear that today's America is in no way morally or politically comparable to totalitarian states like Nazi Germany, yet he warns that unchecked economic power risks verging on total power and has its own unnerving pathologies.

Wolin examines the myths and mythmaking that justify today's politics, the quest for an ever-expanding economy, and the perverse attractions of an endless war on terror. He argues passionately that democracy's best hope lies in citizens themselves learning anew to exercise power at the local level.

Democracy Incorporated is one of the most worrying diagnoses of America's political ills to emerge in decades. It is sure to be a lightening rod for political debate for years to come.

The book is published by Princeton University Press.

Democracy Incorporated: Managed Democracy and the Specter of Inverted Totalitarianism

This title is due for release on September 30, 2018
We'll send you an email as soon as it is available!