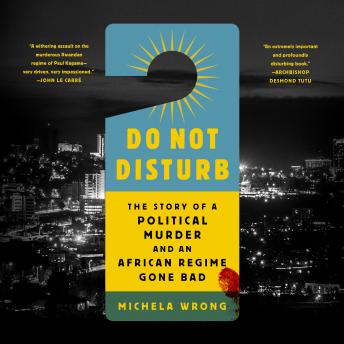 Do Not Disturb: The Story of a Political Murder and an African Regime Gone Bad

A powerful investigation into a grisly political murder and the authoritarian regime behind it: Do Not Disturb upends the narrative that Rwanda sold the world after one of the deadliest genocides of the twentieth century.

We think we know the story of Africa’s Great Lakes region. Following the Rwandan genocide, an idealistic group of young rebels overthrew the brutal regime in Kigali, ushering in an era of peace and stability that made Rwanda the donor darling of the West, winning comparisons with Switzerland and Singapore. But the truth was considerably more sinister.

Vividly sourcing her story with direct testimony from key participants, Wrong uses the story of the murder of Patrick Karegeya, once Rwanda’s head of external intelligence and a quicksilver operator of supple charm, to paint the portrait of a modern African dictatorship created in the chilling likeness of Paul Kagame, the president who sanctioned his former friend’s assassination.

Do Not Disturb: The Story of a Political Murder and an African Regime Gone Bad