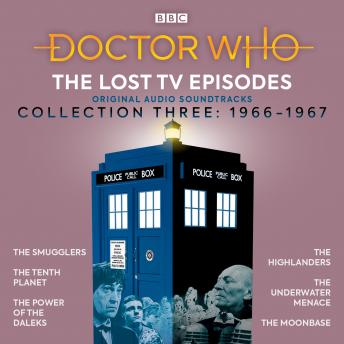 Absent from the TV archives, these stories survive in their entirety only as soundtrack recordings. Now remastered, with additional linking narration, you can enjoy them again: plus bonus interviews with Anneke Wills, and the BBC Radio 3 programme Dance of the Daleks.

In The Smugglers, the travellers have an adventure in 17th Century Cornwall with pirates and hidden treasure; in The Tenth Planet Earth's twin planet enters the solar system and brings with it the Cybermen; in The Power of the Daleks a new Doctor must fight the Daleks on the swamp planet Vulcan; in The Highlanders the TARDIS arrives in Scotland after the battle of Culloden; in The Underwater Menace it lands above the long-lost city of Atlantis; in The Moonbase a weather control station is in the grip of plague - caused by the Cybermen.

In the bonus feature Dance of the Daleks, Matthew Sweet investigates the weird and wonderful sound world of Doctor Who.

This title is due for release on March 5, 2020
We'll send you an email as soon as it is available!