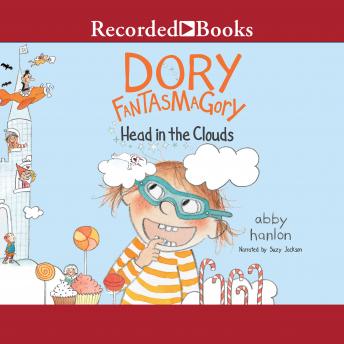 Dory Fantasmagory: Head in the Clouds

A loose tooth leads to hilarious hijinks with the tooth fairy in book four of the wonderfully imaginative Dory Fantasmagory series Dory has her first loose tooth, and, with her usual over-the-top excitement, she cannot stop talking about the tooth fairy. Naturally, this drives her brother and sister crazy. But it also sparks a serious jealous streak in her nemesis, Mr. Gobble Cracker, who wants all of Dory's attention to herself. But Mrs. Gobble Gracker has decided to steal the tooth fairy's job, and flying around in a tutu from Rosabelle, she heads for Dory's house. It's time for Dory to come up with a serious plan to get the tooth fairy her job back. The fourth installment in the wildly popular Dory Fantasmagory series delivers laughs on every page as Dory teams up with her pals, real and imaginary, to save the tooth fairy for all the world's children-and get her dollar! Series Overview: As the youngest member of her family, Dory is often left to her own devices-including her wild imagination, untiring energy, and a whole host of imaginary friends. With plenty of pictures bursting with charm and character, this hilarious series about an irresistible rascal is the new must-read for the chapter book set.

This title is due for release on March 15, 2018
We'll send you an email as soon as it is available!