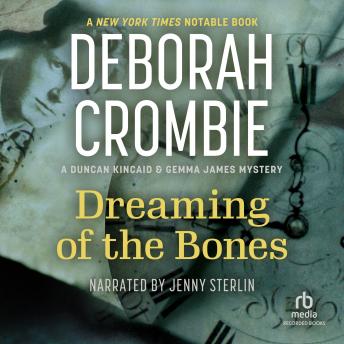 Dreaming of the Bones

Often compared to both Ruth Rendell and P.D. James, Deborah Crombie is internationally acclaimed for her deftly written mysteries that combine suspense, with lyrical prose. Sharply etched characters further enrich this story of tangled relationships and dark secrets. Twelve years after their divorce, Scotland Yard Superintendent Duncan Kincaid receives a phone call from his ex-wife Victoria asking for his help. While working on a biography of the late poet Lydia Brooke, she has uncovered information that has her convinced Lydia's suicide five years ago was really murder. As Duncan begins his investigation, another murder occurs closer to home. Now he finds himself frantically searching for clues in Lydia's complicated past to find the killer before he strikes again. Award-winning author Deborah Crombie has crafted a beautifully written, multilayered mystery that leaves you gasping with surprise. Jenny Sterlin's narration deftly creates an air of suspense while capturing every nuance of the language. Also available by Deborah Crombie: Kissed a Sad Goodbye.

This one was long, but it was good. Best book in the series thus far—but this one is only #5! Lol

This title is due for release on December 11, 2009
We'll send you an email as soon as it is available!