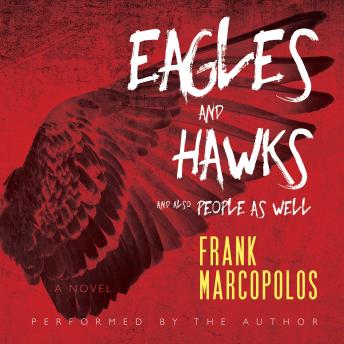 Eagles and Hawks and Also People As Well

The adventures of college athlete Enzo Prinziatta continue in a stunning novel critics are raving about!

'This is a thoughtful, articulate, and often humorous narrative about the choices we all make, sometimes in the space of a single heartbeat, and the life-altering impact of our subsequent actions. It’s also a bittersweet tale of self-discovery and seminal experiences, full of realistic dialogue, unexpected situations, and offbeat characters. A highly readable novel that recalls the style of Michael Chabon or John Irving, this is a literary gem that should not be missed.' - Starred review, Blue Ink

'The mysterious keeps taking prominence in this novel: the hazing rituals, which are amusing, sexy, confusing, and disturbing all at once; the hard-to-figure attitudes of Enzo’s teammates; oddities like a replica of the Winchester Mystery House that somehow features a pagan mechanical bull ride; Trudy’s oracular pronouncements; and portentous dreams and symbols involving several dead birds and brick-tied balloons that a teammate pops. Each image speaks of death and aborted flight, a counterpoint to Enzo’s longing for the big leagues and a home that isn’t stifling... A well-written, intriguing sports tale that explores the importance of home base.' - Kirkus Reviews

'As bittersweet as growing up. I wholeheartedly recommend it. Frank Marcopolos delivers drama and humor in a poignant story about a college baseball player looking for a way into the big league.' -IndieReader (5 stars)

'Marcopolos has a flair for conveying recognizable human drama, with relateable characters who you want to see succeed. He has a far-reaching knowledge and vision about his characters' lives, which comes through as the novel unfolds... A good story with likeable characters, and a moving and meaningful novel.' - SPR

This title is due for release on September 24, 2017
We'll send you an email as soon as it is available!