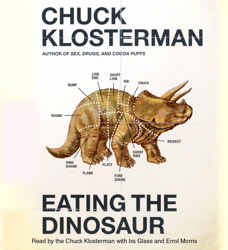 After a bestselling and acclaimed diversion into fiction, Chuck Klosterman, author of Sex, Drugs, and Cocoa Puffs, returns to the form in which he’s been spectacularly successful with a collection of essays about our consumption of pop culture and sports.

Q: What is this book about?

A: Well, that’s difficult to say. I haven’t read it yet—I’ve just picked it up and casually glanced at the back cover. There clearly isn’t a plot. I’ve heard there’s a lot of stuff about time travel in this book, and quite a bit about violence and Garth Brooks and why Germans don’t laugh when they’re inside grocery stores. Ralph Nader and Ralph Sampson play significant roles. I think there are several pages about Rear Window and college football and Mad Men and why Rivers Cuomo prefers having sex with Asian women. Supposedly there’s a chapter outlining all the things the Unabomber was right about, but perhaps I’m misinformed.

Q: Is there a larger theme?

A: Oh, something about reality. “What is reality,” maybe? No, that’s not it. Not exactly. I get the sense that most of the core questions dwell on the way media perception constructs a fake reality that ends up becoming more meaningful than whatever actually happened. Also, Lady Gaga.

Q: Should I read this book?

A: Probably. Do you see a clear relationship between the Branch Davidian disaster and the recording of Nirvana’s In Utero? Does Barack Obama make you want to drink Pepsi? Does ABBA remind you of AC/DC? If so, you probably don’t need to read this book. You probably wrote this book. But I suspect everybody else will totally love it, except for the ones who totally hate it.

This title is due for release on October 20, 2009
We'll send you an email as soon as it is available!