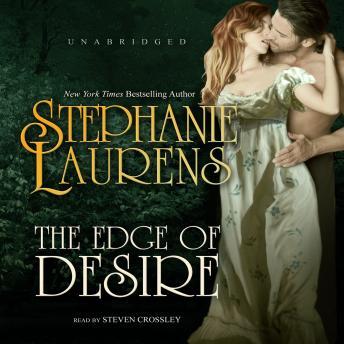 The Edge of Desire: A Bastion Club Novel

They proved their bravery fighting for His Majesty’s Secret Service and were rewarded with brides of great beauty and breeding. But one member of the Bastion Club has remained a bachelor—until now.
“Christian, I need your help. There is no one else I can turn to…L.”
When Christian Allardyce, sixth Marquess of Dearne, reads those words, his world turns upside down. Lady Letitia Randall is a woman like no other, and the day he left her behind to fight for king and country was the most difficult of his life. He never forgot the feel of her lips against his, but he never expected to see her again. Yet now she seeks his help, and Christian knows he will not resist her plea.
Letitia believes that Christian abandoned her when she needed him most, and she hates to call on his aid. But to clear her brother’s name, she has sworn to use every weapon at her command, even if it means seducing her ex-lover. Yet all the while, Christian is waging a war of his own—a campaign of pure pleasure and sweet revenge that will take them both beyond the edge of desire.

This title is due for release on January 20, 2012
We'll send you an email as soon as it is available!