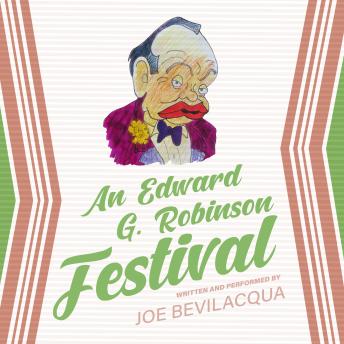 An Edward G. Robinson Festival is a collection of tributes, parodies, and rarities of the great film actor-written, produced, and performed by Joe Bevilacqua. Bonus tracks feature remastered classic radio dramas.
This set includes:
If We All Talked Like Allen JenkinsMurder is a Merry-Go-RoundThe ReflectionHobo HawkWillaby Meets the GodfatherThe Man who Wanted to be Edward G. RobinsonThe TrapKey LargoJoe Bevilacqua, also known as Joe Bev, is a public radio producer and radio theater dramatist. However, his career has taken him into every aspect of show business, including stage, film, and television as a producer, director, writer, author, actor, journalist, documentarian, and even cartoonist. He is also a member of the Metropolitan Opera Company in New York City.
Edward G. Robinson (born Emanuel Goldenberg; Yiddish: ???????? ????????????; December 12, 1893 - January 26, 1973) was an American actor of stage and screen during Hollywood's Golden Age. He appeared in 40 Broadway plays and more than 100 films during a 50-year career and is best remembered for his tough-guy roles as gangsters in such films as Little Caesar and Key Largo.