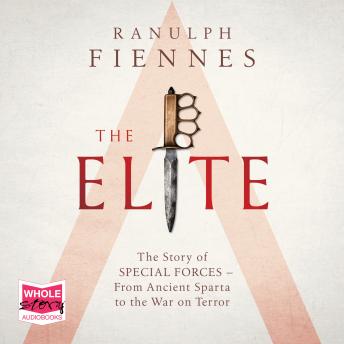 The Elite: The Story of Special Forces - From Ancient Sparta to the Gulf War

Inspired by the heroic war time escapades of his father, as well as drawing on his own experiences in the special forces, acclaimed adventurer Sir Ranulph Fiennes thrillingly explores the history of elite military units, from ancient Sparta to the War on Terror.


Elite military units have frequently been immortalised on the big screen, and in computer games, for their daring deeds. Whether it be fighting on the battlefield, storming castles, rescuing hostages, high stakes reconnaissance missions or the assassination of enemy leaders, these are the men who are relied upon to undertake dangerous missions of the highest stakes. While celebrating the heroics of groups such as the SAS and Navy Seals, Sir Ranulph also reveals the true stories of infamous organisations such as The Assassins and Templar Knights. Uncovering their origins, and examining their weapons and tactics, Sir Ranulph showcases these units most famous missions, and reveals the men behind them. Showing incredible courage, these units have also changed the course of history along the way.


While these units traditionally prefer to operate in the shadows, Sir Ranulph brings their remarkable histories to the fore, told with his trademark ability to weave a story which has seen him become one of Britain's most beloved bestselling authors.

Elite: The Story of Special Forces - From Ancient Sparta to the Gulf War

This title is due for release on October 17, 2019
We'll send you an email as soon as it is available!