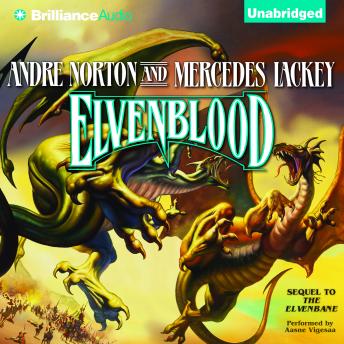 The powerful magic of ruthless Elvenlord masters has for centuries ruled the world. Even Shana, the legendary Elvenbane prophesied to deliver the oppressed into freedom, is helpless before such power. She and her ragtag band of outcasts, half-blood wizards, escaped human slaves, and free-thinking dragons have gained only a token victory against the mighty lords.

Only the long-forgotten Iron People, a band of human nomads, have escaped the tyranny of the reigning wizards. How have they survived through the centuries?

As the winds of change sweep the world, and as tensions seething beneath the surface of Elven society threaten to break into open revolt, Shana meets the ancient tribe. Could an age-old secret free Shana and her people…or will its discovery call down their doom?

“The talents of collaborators Norton and Lackey blend seamlessly as they expand the background to their epic fantasy.” —Library Journal