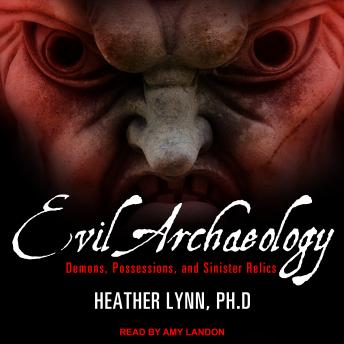 An investigation into the historical and archaeological evidence of demons, curses, and possession, featuring some of the most gruesome artifacts and sites ever discovered

Demons, jinn, possession, sinister artifacts, and gruesome archaeological discoveries haunt this new book by Dr. Heather Lynn. Evil Archaeology investigates the archaeological record for artifacts and evidence of evil entities, revealing how demons from the ancient world may be dwelling among us. It also looks at the history and lore behind real relics believed to be haunted and includes historical accounts of demonic possession that go as far back as King Solomon invoking demons to help him build his famed temple.

Is there really a prehistoric fertility goddess figure that has been known to bring death to the families of anyone who holds it? Are there real vampire graveyards? Can the archaeological record prove the existence of demons and malevolent entities?

- What is the origin of demons?

- What role did Sumerian demons play in the development of civilization?

- Can material objects contain evil? What about places?

- What can we do to protect ourselves, according to historical records?

- Was Jesus an exorcist?

This book had almost nothing to do with archeology. Almost all the bookdeals with current happenings and no real history behind it. The title leads one to beekeeping that this book would deal with ancient myths bard on archeological evidence, but that could be nothing farther from the truth

This title is due for release on April 1, 2019
We'll send you an email as soon as it is available!