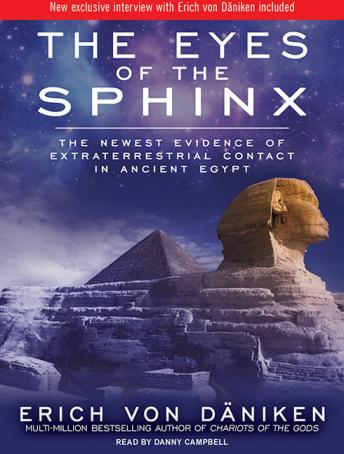 The Eyes of the Sphinx: The Newest Evidence of Extraterrestrial Contact in Ancient Egypt

In this follow-up to Erich von Daniken's worldwide bestseller Chariots of the Gods, the author reveals startling new evidence that could prove his theory that ancient Earth had contact with aliens. Von Daniken claims that an alien race helped to create the pyramids of Egypt, a claim he based upon the ruins themselves. And it is these ruins that now provide researchers with a never-ending source of clues, compelling discoveries, revelations, and evidence that Earth was indeed colonized by an alien race:

-Research showing that the location and design of the pyramids were uniquely fit for preservation-something the Egyptians couldn't possibly have known.

-Remains of the ships built by the Pharaohs and buried with them for travel in the afterlife-imitations of the ships they saw used by men from the sky.

-The most recent discoveries-hidden chambers and passageways, one of which ends at an ancient door. And behind the door is...the unknown.

-Prehistoric bones that prove the existence of a worldwide cult that deformed children's skulls in imitation of the 'gods' they had seen.

This title is due for release on March 31, 2011
We'll send you an email as soon as it is available!