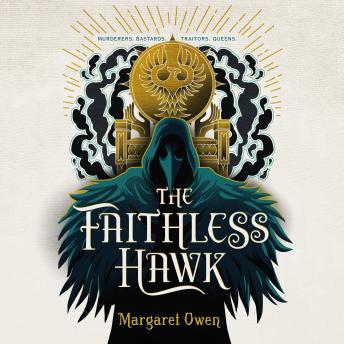 Kings become outcasts and lovers become foes in The Faithless Hawk, the thrilling sequel to Margaret Owen's The Merciful Crow.

As the new chieftain of the Crows, Fie knows better than to expect a royal to keep his word. Still she’s hopeful that Prince Jasimir will fulfill his oath to protect her fellow Crows. But then black smoke fills the sky, signaling the death of King Surimir and the beginning of Queen Rhusana's merciless bid for the throne.

With the witch queen using the deadly plague to unite the nation of Sabor against Crows—and add numbers to her monstrous army—Fie and her band are forced to go into hiding, leaving the country to be ravaged by the plague. However, they’re all running out of time before the Crows starve in exile and Sabor is lost forever.

A desperate Fie calls on old allies to help take Rhusana down from within her own walls. But inside the royal palace, the only difference between a conqueror and a thief is an army. To survive, Fie must unravel not only Rhusana’s plot, but ancient secrets of the Crows—secrets that could save her people, or set the world ablaze.