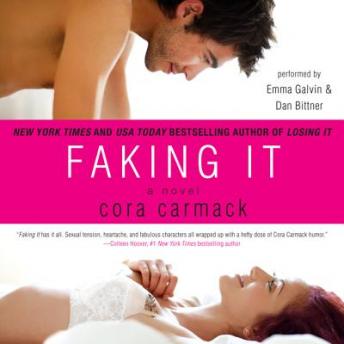 Mackenzie "Max" Miller has a problem. Her parents have arrived in town for a surprise visit, and if they see her dyed hair, tattoos, and piercings, they just might disown her. Even worse, they’re expecting to meet a nice wholesome boyfriend, not a guy named Mace who has a neck tattoo and plays in a band. All her lies are about to come crashing down around her, but then she meets Cade.

Cade moved to Philadelphia to act and to leave his problems behind in Texas. So far though, he’s kept the problems and had very little opportunity to take the stage. When Max approaches him in a coffee shop with a crazy request to pretend to be her boyfriend, he agrees to play the part. But when Cade plays the role a little too well, they’re forced to keep the ruse going. And the more they fake the relationship, the more real it begins to feel.

This was a cute, enjoyable read that was great to pass a little time, but not something I need to run out and tell everyone I know to read. First of all, the premise of this story is really farfetched. We have a rock n roll heroine with tattoos and piercings, supposedly comfortable in her own skin, but she can’t show her tattoos to her mom and dad. And her parents were too unrealistic in my opinion. Too perfect, too sweet, and way to ignorant of their daughter. I just can’t believe Max has managed to hide her tattoos and piercings for so long. And, Max is trying to build a career in a rock band and her parents know and support that goal—why wouldn’t they accept a few tattoos? Still, the story is fiction so I try to suspend belief. I thought the chemistry between Max and Cade was excellent and I was really happy to see Cade move on from Bliss. Cade is an awesome guy and I loved that he urged Max to be herself. He encouraged her to show that part of herself to her parents. Max was a bit obnoxious to me at times, but I didn’t hate her. I didn’t like her wavering. One minute she’d be thinking her and Cade were no good for each other, then she worried she wasn’t good enough for him. Her worries almost had her sabotaging the relationship and I just didn’t understand why she would try to destroy something she wanted so much. Her excuses and reasons seemed a bit flimsy to me. Overall, I was rooting for them to make it in the end and I enjoyed the book.