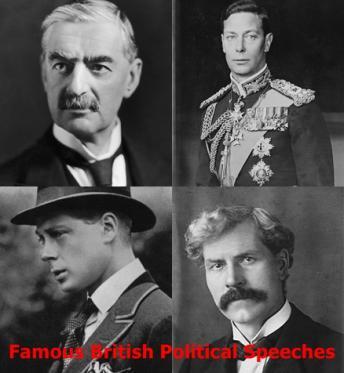 James Ramsay MacDonald, (October 12, 1866 - November 9, 1937) was a British statesman who was the first ever Labour Prime Minister of the United Kingdom, leading a Labour Government in 1924, and from 1929 to 1931, and a National Government from 1931 to 1935. The following is a 1929 political broadcast discussing peace and unemployment. George V, born on June 3, 1865, was the King of the United Kingdom and the British Dominions, and Emperor of India, from May 6, 1910, until his death on January 20, 1936. The following 1932 recording is the first royal Christmas Day broadcast, which started an annual tradition. Edward VIII (June 23, 1894 - May 28, 1972) was King of the United Kingdom and the Dominions of the British Commonwealth, and Emperor of India, from January 20 to December 11, 1936. The following is the December 11, 1936 broadcast to the nation and the Empire, explaining his decision to abdicate the throne so that he might marry his love, Wallis Simpson, an American. Stanley Baldwin (August 3, 1867 - December 14, 1947) was a British Conservative politician, who dominated the government in his country between the two world wars. The following is from a 1937 speech extolling the virtues of British life versus German Nazi life. Neville Chamberlain (March 18, 1869 - November 9, 1940) was a British Conservative politician who served as Prime Minister of the United Kingdom from May 1937 to May 1940. Chamberlain is best known for his appeasement foreign policy, and in particular for his signing of the Munich Agreement in 1938, conceding the Sudetenland region of Czechoslovakia to Germany. When Adolf Hitler continued his aggression by invading Poland, Britain declared war on Germany on 3 September 1939, and Chamberlain led Britain through the first eight months of the Second World War. The following is a September 1938 recording regarding the Munich Agreement. George VI (December 14, 1895 - February 6, 1952) was King of the United Kingdom and the Dominions of the British Commonwealth from 11 December 1936 until his death. He was the last Emperor of India, and the first Head of the Commonwealth.  His life is the basis for the Academy Award winning movie, "The King's Speech," featuring actors Colin Firth and Geoffrey Rush. The following is a broadcast on D-day, June 6, 1944.

This title is due for release on January 6, 2016
We'll send you an email as soon as it is available!