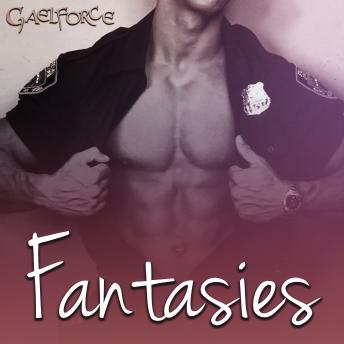 Role Play Fantasies are about being whoever you want to be, taking a step into the unknown and sometimes even the forbidden.
Irish audio author Gaelforce presents an array of sensual and erotic scenarios. designed to bring comfort, enpowerment and pleasure to his listeners. Let his lilting accent and hypnotic sensuality transport you to a world of fantasy.
Gael is well known not only for his warmth, humor, and intoxicating sexiness, but his deep love and respect for women. His passion is to bring confidence and healing to his listeners. No matter the scenario, you will feel safe and valued. Using immersive soundscapes and a revolutionary 3D microphone, let Gael entice you into his seductive world.
Track List
01 - Friends With Benefits
02 - I Want To Be Your Fantasy
03 - Naughty Professor
04 - Fireman
05 - In The Stacks
06 - Dirty Cop
07 - Mountain Rescue
08 - Handy Man
09 - Give Up Control
10 - Long Distance Daddy
11 - Masquerade
12 - Please Me
13 - You're The Boss
01 - Friends With Benefits
I've had a long hard day and I need my friend to come over and comfort me
02 - I Want To Be Your Fantasy
It's been a while since I talked dirty to you. I can be anything you need me to be.
03 - Naughty Professor
Your attention should be on my lecture, instead you're focus is turning me on from your seat in the front row... Are you sure you're not pursuing a degree in seduction?
04 - Fireman
You're caught in a hotel fire until a sweet & sexy fireman comes to your rescue in more ways than one.
05 - In The Stacks
A surprise visit to my job turns into a hot time in the stacks...
06 - Dirty Cop
You really shouldn't be speeding. But you say you'll do ANYTHING to get out of a ticket, and I happen to have a pair of handcuffs!
07 - Mountain Rescue
A beautiful mountain hike goes wrong leaving you stranded. Fortunately Ireland employs very capable rescue pilots who will save you from danger!
08 - Handy Man
He's been working at your house for weeks, the flirtation comes to a head on his last day of work where he shows you he has the tools for ANY job.
09 - Give Up Control
A business trip turns sexy as your coworker becomes your boss in the bedroom.
10 - Long Distance Daddy
Hi kitten, it's Daddy. I know it's late, but I missed you and had to hear your voice.
11 - Masquerade
A wonderful party. A crowded room. A handsome stranger. Hidden touches and muted moans. Don't get caught!
12 - Please Me
You love the power you have over my body don't you? The way I moan and shiver under your touch. Take me, lover. I'm all yours.
13 - You're The Boss
It's time for my yearly review. I hope you are more than satisfied with my performance.

"Guess who's back, back again? Gael is back, tell a friend! Guess who's back, guess who's-" Oh man, I just realized that some of the people who end up listening to this audiobook might not pick up on the Eminem reference. Largely because "Without Me" was released over 15 years ago, when some of the Gaelforce fans on the younger side of the spectrum would've only been 3 or 4 years old. And no one that age should have been listening to an Eminem album. However, if you are currently 18 years old and a fan of audio erotica, you should very much be listening to Gael's latest audiobook, aptly called "Fantasies"! Much like its predecessors, "Moving In" and "50 Shades of Gaelforce", there's a little something for everyone in this audiobook. And in a genre like erotica, where there's a huge amount of variety in terms of individual tastes and preferences, Gael's versatility as an audio artist and storyteller is one of his greatest strengths. Parts of this audiobook will make you feel like you're at a career fair. But, like, a really sexy and fun career fair. Have you ever wondered what Gael would be like as a steamy firefighter? There's an audio for that! Is a raunchy college professor more up your alley? There's an audio for that, too! Do you fantasize about having Gael as your insurance claims adjuster? Well, there's not a specific audio for that per se, but you could always pretend that he's an insurance claims adjuster in "You're the Boss", an audio where the listener is on the higher end of the naughty power differential! In addition to playing a variety of roles, Gael also explores different sexual dynamics in this audiobook (e.g., FWB, DD/lg, femdom, etc.) As always, he makes these audios with a great deal of underlying respect and consideration for his audience, so even listeners who are unfamiliar with a particular kink are likely to feel at ease. This is a significant part of his appeal as an audio artist, as there are unfortunately other artists out there whose creative forces are driven mostly by self-gratification, shock value, or what they think will sell the most copies of an audiobook. Anyway, if you've read this far, you should probably just stop reading and go listen to Gael's "Fantasies"! Because in that audiobook... "Hey! There's a concept that works! Twenty million other audio artists emerge But no matter how many fish in the sea It'll be so empty without G!" (And maybe go listen to Eminem's "Without Me", while you're at it. This review will make a lot more sense if you do, I promise.)

This title is due for release on September 16, 2017
We'll send you an email as soon as it is available!