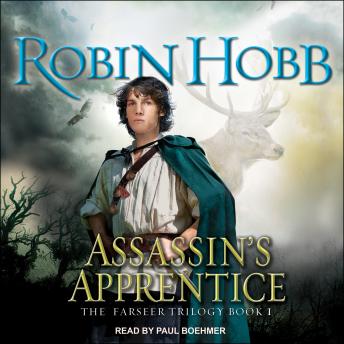 With unforgettable characters, a sweeping backdrop, and passionate storytelling, this is a fantasy debut to rival that of Robert Jordan. Filled with adventure and bloodshed, pageantry and piracy, mystery and menace, Assassin's Apprentice is the story of a royal house and the young man who is destined to chart its course through tempests of change.

Young Fitz is the bastard son of the noble Prince Chivalry, raised in the shadow of the royal household by his father's gruff stableman. An outcast whose existence has forced his father to abdicate his claim on the throne, Fitz is ignored by all royalty except the devious King Shrewd, who has him secretly tutored in the arts of the assassin. For in the young man's blood is a heritage of magic, the talent called the Skill, as well as another, even more mysterious ability.

As barbarous raiders ravage the coasts and leave behind the zombie-like husks of the townspeople to prowl the countryside, Fitz is growing toward manhood. Soon he will face his first dangerous, soul-shattering mission, a mission that poses as much a threat to himself as it does for his target-for Fitz is a threat to the throne...but he may also be the key to the survival of the kingdom.

This title is due for release on March 3, 2010
We'll send you an email as soon as it is available!