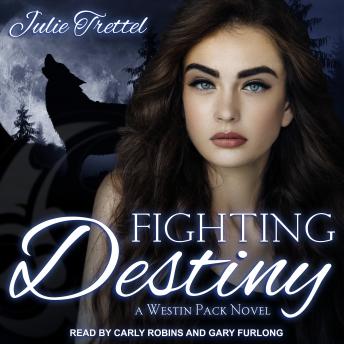 What happens when you choose not to accept fate?

Elise Westin is obsessed with one thing. Avoid Patrick O'Connell at all costs. She knows the handsome foreigner is her one true mate. She knows they are destined to be together. Knowing it doesn't stop her from fighting it the only way she knows how . . . run and hide. But hiding from him can only last so long. Fate, with the help of her family, forces her to come face to face with him. Will she be able to confront her own fears and accept love? Or will she lose it all by fighting her own destiny?

Patrick O'Connell has given up everything. Banished from his own pack. Living in a foreign territory. He's chasing a dream that he was raised to believe doesn't exist. But he knows he's found his one true mate. She's real. One whiff of the dark-haired beauty changes the path of his life forever. With nothing else to lose, he won't stop until he finds her again. But Elise doesn't want to be found. Can he win the heart of his elusive mate? Can Patrick break down Elise's barrier of fears to find their happily ever after?