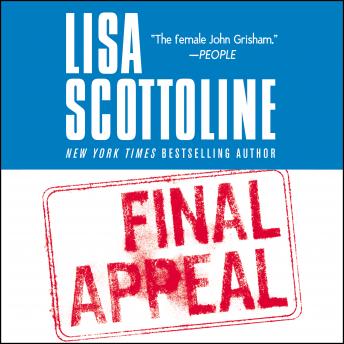 “Scottoline is a master.”—Philadelphia Inquirer


Assigned to an explosive death penalty appeal, a long day of work unexpectedly leads to a night of passion with the chief judge. But when Gregorian is found dead the next morning, an apparent suicide, Grace knows she must uncover the truth.

Suddenly this working mother finds herself investigating a murder, unearthing a secret bank account, and following a trail of bribery and judicial corruption hidden even from the FBI. In no time at all, Grace under fire takes on a whole new meaning. With the help of an undercover federal agent, she will risk everything to see justice done.

While the story line was good, Kate Burton, as a reader, was TERRIBLE. She read far too quickly, in a panicked monotone and made the story difficult to listen to. I don't think I'll listen to anything else she's read!

Except for a couple of colorful law clerks, I found this book by LS to be relatively shallow. Her other work, especially when it involves the Italian Amercian community, has more depth of character, which makes it a more engaging read (listen). However, it is a good light diversion.

Let me start by saying I like Kate Burton's stuff. This isn't the usual female law firm story though and I didn't like the main character all that much. She seemed weak and gullible. And then dumb. The rest of the multitude of characters were enjoyable if a bit on the cliche side. I'd have liked this better if the main characters had some significant character flaws, but in this world only the bad guys are bad and they are very bad. The action moves right along so you won't be bored... Worth a listen.

Lisa Scotioline once again has been able to keep you rivetted to your seat. Her writting style keeps one going back for more.

Somewhat predictable but kept me engaged (perhaps b/c I wanted to find out if I was right.)

This title is due for release on November 2, 2004
We'll send you an email as soon as it is available!