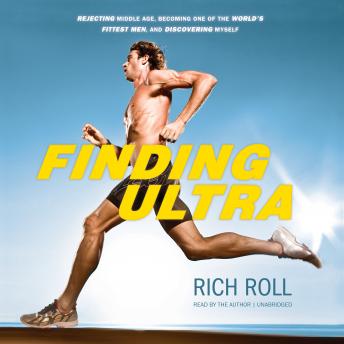 Finding Ultra: Rejecting Middle Age, Becoming One of the World's Fittest Men, and Discovering Myself

An incredible but true account of achieving one of the most awe-inspiring midlife physical transformations ever.

In October 2006, the night before he was to turn forty, Rich experienced a chilling glimpse of his future. Nearly fifty pounds overweight and unable to climb the stairs without stopping, he saw where his sedentary lifestyle was taking him. Most of us look the other way when granted such a moment of clarity, but not Rich. Plunging into a new way of eating that made processed foods off limits and prioritized plant nutrition and daily training, Rich morphed-in mere months-from out-of-shape midlifer to endurance machine. Ninety days into his physical overhaul, Rich left the house for a light jog and found himself running a near marathon. It was time to scale up his goals.

How many of us take up a sport at age forty and compete for the title of the world's best within two years? Finding Ultra recounts Rich's remarkable journey to the starting line of the elite Ultraman World Championship competition, which pits the world's fittest humans against each other in a 320-mile ordeal of swimming, biking, and running. Following that test, Rich conquered an even greater one: the Epic5 Challenge-five Ironman-distance triathlons, each on a different Hawaiian island, all completed in less than a week.

This is more than an inside look at a series of jaw-dropping athletic feats or a practical training manual for those who would attempt a similar transformation. Yes, Rich's account rivets and instructs, providing information that will be invaluable to anyone who wants to change their physique; but this book is most notable as a powerful testament to human resiliency, for as we learn early on, Rich's life has posed numerous physical and social challenges, including a fierce battle with alcoholism.

Ultimately Finding Ultra is a beautifully written portrait of what willpower can accomplish. It challenges us to rethink what we're capable of and urges us, implicitly and explicitly, to "go for it."

"You walk away from reading this book knowing you have the total power to transform your life on every level...Roll is immensely likeable, a most compelling storyteller, and a true shaman of health and fitness!"-Kathy Freston, New York Times bestselling author

absolutely loved this Rich, being middle aged myself & struggling with alcohol addiction and a poor self image, I've progressed to become a fit, happy man with ambitions of completing my own endurance challenges. thankfully for your inspiration. ✌ #FindingMyUltra.

great and very open life story, it inspired me to go plant based and try and see how this can help my life goals, thanks for sharing your story rich

I am a recreational runner who has been working out regularly for more than a decade now yet I learned a lot from this book! I am fit and didn't know until now that there are things I am doing wrongly, specifically slowing down to build my endurance. I also love Rich's story and am inspired by his dedication.

Unbelievable book. An awe inspiring story on the life of the world’s fittest man and his journey getting there.

Fascinating story, although I kind of knew it already from the podcasts. It does seem a bit dated if you have read Eat and Run or other similar ones. But very interesting new additions in the latest verision on the vegan diet and tips to be your ultra best. I would recommend a vegan diet to all, and this is a useful guide. Rich Roll is a great guy who we can all relate to and we should all aspire to be more like him.

Its a great read, full of real life challenges and lessons. Its always nice to listen to the author narrate his/her own story, it made me feel like I was with him all the way....in the pool, on the bike, on the run and also felt the pain he narrated. What is key is the way he turned around his whole life is just amazing, from an alcohol addict to as athletic as he became...very inspiring.... I strongly recommend you read it.

A must read for everyone. Really enjoyed it made it special as the narrator was the author. Sad when I finished listening to it!

Great book about Rich's story, read by Rich Roll himself.

Great story read by Rich himself. I loved this story

Written from the heart Rich takes us along on his roller coaster - that takes him from shy child to outstanding swimmer. Only to see alcohol nearly ruin it all. I loved the rawness of his experiences and the success he achieved through effort.

Most awesome book. What an inspiration and some much honesty. Enjoyed Rich Roll reading this book, totally had me captured the entire team. You are never to old to get started!

Inspiring words that spoke to 9 me by Rich Roll's own voice :)

This title is due for release on May 22, 2012
We'll send you an email as soon as it is available!