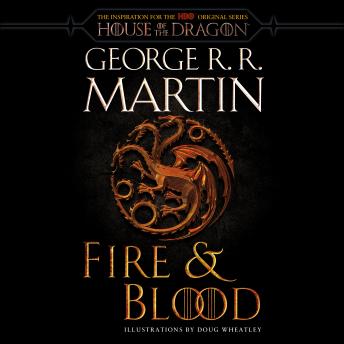 #1 of A Targaryen History

#1 NEW YORK TIMES BESTSELLER • The thrilling history of the Targaryens comes to life in this masterly work, the inspiration for HBO’s upcoming Game of Thrones prequel series House of the Dragon

“The thrill of Fire & Blood is the thrill of all Martin’s fantasy work: familiar myths debunked, the whole trope table flipped.”—Entertainment Weekly

Centuries before the events of A Game of Thrones, House Targaryen—the only family of dragonlords to survive the Doom of Valyria—took up residence on Dragonstone. Fire & Blood begins their tale with the legendary Aegon the Conqueror, creator of the Iron Throne, and goes on to recount the generations of Targaryens who fought to hold that iconic seat, all the way up to the civil war that nearly tore their dynasty apart.

What really happened during the Dance of the Dragons? Why was it so deadly to visit Valyria after the Doom? What were Maegor the Cruel’s worst crimes? What was it like in Westeros when dragons ruled the skies? These are but a few of the questions answered in this essential chronicle, as related by a learned maester of the Citadel and featuring more than eighty all-new black-and-white illustrations by artist Doug Wheatley—including five all-new illustrations exclusive to this edition. Readers have glimpsed small parts of this narrative in such volumes as The World of Ice & Fire, but now, for the first time, the full tapestry of Targaryen history is revealed.

With all the scope and grandeur of Gibbon’s The History of the Decline and Fall of the Roman Empire, Fire & Blood is the the first volume of the definitive two-part history of the Targaryens, giving readers a whole new appreciation for the dynamic, often bloody, and always fascinating history of Westeros.

Includes a bonus PDF of illustrations from the book

“The saga is a rich and dark one, full of both the title’s promised elements. . . . It’s hard not to thrill to the descriptions of dragons engaging in airborne combat, or the dilemma of whether defeated rulers should ‘bend the knee,’ ‘take the black’ and join the Night’s Watch, or simply meet an inventive and horrible end.”—The Guardian

I absolutely loved this book!!!

If you think (as I did) this will be written like the rest of the books, you will be disappointed. This is a history. There's not a lot of drama, suspense, or dialogue ... it's all from the perspective of people who recorded the events. Honestly, I think they could have given us a chart of the king's family from Aegon through his descendants, and it would have saved a lot of time. It was nice to hear a bit about the dragons when they were alive, but that was it. Also, if you (like me) are hoping to find out about the mysteries of Valyria (based on that summary above) - you will be sorely disappointed. There is one tale of a person (and a dragon) who "likely" went there and returned and what happened to their bodies ... that's it. If you loved Lord of the Rings and were disappointed when you read (or listened to) The Silmarillion, this will be the same. Sorry.

This is a narrative of the history of the Targaryen’s. There is no dialogue between the characters. I wish it would have taken us a little closer to where GOT picks up.

ok, so I bought this book when it first came out but didnt read/listen to it as I was coming down off the GoT TV series high. I have some pros and cons of this book. Pros: It brought me back into Westeros and allowed me to build that mental fantasy back. Like so many I'm so intrigued of how this world of dragons and wolves can Rope you and not release the hooks of intricacy and be so much of a segway into other series; Dragons Tameraire and Misfit series. Simon Vance is such an amazing narrator, I'm not sure about most but he keeps you engaged, shoutout to Mr. Vance bringing amazing to our ears and homes. Cons: it got reeeeeeally dry after the dance of the dragons. To the point I wondered why was I reading this unfortunately. After the dragons were killed off it really killed the book, essentially it wipe the lore from the book. Without fantasy and things that can't happen it becomes....normal. I wish the adventures of Duncan and Egg were included as this could've ended the series with tragedy and further setup the TV series. Overall great book..cant wait for winds of winter.....one day.

I enjoyed the stories, although not nearly as much as the original GoT stories because the details and character development are better. The narrator is excellent.

I'll admit it. It is a great book, but n it is George R.R. Martin, so of course it is good. If you liked House of the Dragon, this is definitely worth a read. If you like A Song of Ice and Fire, this is worth picking up. However, unless you're already in love with Westeros, this might not be the story for you. It is very much like a history text, but that is also what makes it fun. Take that into account when you read this, and I'm sure you'll have a great time.

I love this book. I first read a song of ice and fire many years before the TV show game of thrones was even being considered. If you're a dork like me who wants to know more about the world, it's history and cultures I suspect you'll enjoy the book. It's written from the perspective of an in world maester from the citadel and is written as a history book of the targaryen dynasty using inworld often contradictory sources, which makes the book feel more grounded and real.

A history lesson of a non existing history

I loved the game. Only it would get stuck, pause (no sounds) for what seems like forever so I fast forwarded which meant I missed a lot. I really wish you all would check these audiobooks for mistakes. Thank you

Can't listen to book. I used free credit and it doesn't work.

Great addition to the world that George R. R. Martin has created; you get a thorough fleshing out of characters that have only been previously touched upon in other tellings. The only downside being that the book does focus too much on stories that have already been told in previous publications and it can often feel like a direct copy. While Roy Dotrice will be missed, it is refreshing to get a new "voice".