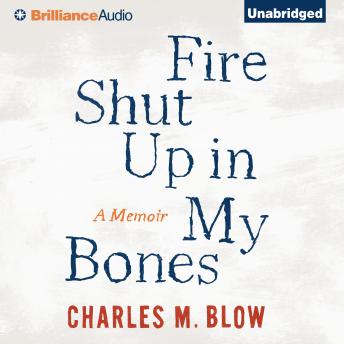 Fire Shut Up In My Bones: A Memoir

A gorgeous, moving memoir of how one of America's most innovative and respected journalists found his voice by coming to terms with a painful past

New York Times columnist Charles M. Blow mines the compelling poetry of the out-of-time African-American Louisiana town where he grew up—a place where slavery's legacy was felt astonishingly close, reverberating in the elders' stories and in the near-constant wash of violence.

Charles's attachment to his mother—a fiercely driven women with five sons, brass knuckles in her glove box, a job plucking poultry at a nearby factory, a soon-to-be-ex husband, and a love of newspapers and learning—cannot protect him from secret abuse at the hands of an older cousin. It's damage that triggers years of anger and searing self-questioning.

Finally, Charles escapes to a nearby state university, where he joins a black fraternity after a passage of brutal hazing, and then enters a world of racial and sexual privilege that feels like everything he's ever needed and wanted, until he's called upon, himself, to become the one perpetuating the shocking abuse.

A powerfully redemptive memoir that both fits the tradition of African-American storytelling from the South, and gives it an indelible new slant.

A really GREAT book. The author is transparent, honest, funny .... a true American success story of strength, faith and perseverance. He came to know and love himself, and what a life lesson and blessing! A must read.

It was a look deep inside a person that I've never read before. Not always exciting, and at times tedious. But worth seeing how prejudices can be overcome step by step.

This title is due for release on September 23, 2014
We'll send you an email as soon as it is available!