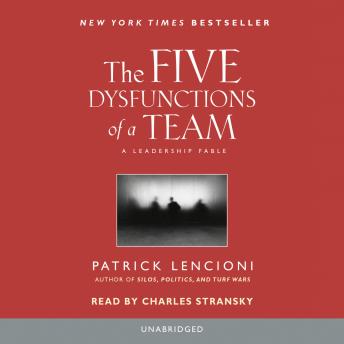 The Five Dysfunctions of a Team: A Leadership Fable

After her first two weeks observing the problems at DecisionTech, Kathryn Petersen, its new CEO, had more than a few moments when she wondered is she should have taken the job. But Kathryn knew there was little chance she would have turned it down. After all, retirement had made her antsy, and nothing excited her more than a challenge. What she could not have known when she accepted the job, however, was just how dysfunctional her team was, and how team members would challenge her in ways that no one ever had before.

In The Five Dysfunctions of a Team, Patrick Lencioni once again offers a leadership fable that is as enthralling and instructive as his first two bestselling books, The Five Temptations of a CEO and The Four Obsessions of an Extraordinary Executive. This time, he turns his keen intellect and storytelling power to the fascinating, complex world of teams.

Excellent book describing issues, that managers and teams are facing on everyday basis. good examples, that can be immediately put into practice. I recommend listening at a slightly faster speed.

Great book. Easy to relate and very relevant. A must-read for business serious about gaining a competitive advantage.

Enjoyed the audio book and learned much more from listening than from reading the book years ago.

This book describes how working in a team should look. And gives you a plan to get there.

Excellent team-building book with clear direction for simple implementation. Lencioni's storytelling illustrates typical personality conflicts that many CEOs and HR managers deal with on a daily basis. This book substantiates that regardless of how great a product or service may be, it's the people who drive a company's success or failure. Narration was good but could have been a bit more captivating.

Great working advise on team building. Not my favorite narrator, but easy to listen to.

Good book, very illustrative. At first narrator seems to bite you but as time goes by you adapt, recommend listening in 1.25 speed

Good book and very relevant in the workplace today.

This is my second favorite book by Lencioni. My favorite is the advantage. However this should not take away from how good this book truly is, it is more of a testament to Patrick's writing. This is a must read for every manager and should be added to curriculum for Business school.

Great book. Very relevant and one of the best teamwork books out there.

Excellent book, easy reading, expect to take our team thought it in detail, listened to it one one day, couldn't put it down.

love the stories and relevance to building a team.

It was not what I expected. It was okay for a coach building a baseball team.

Content is good but the presentation is a bit dry.

Great book. Very relevant and one of the best teamwork books out there.

Enjoyed the narrative style of this book, it allowed me to visualize practical examples in my own team

This title is due for release on July 30, 2002
We'll send you an email as soon as it is available!