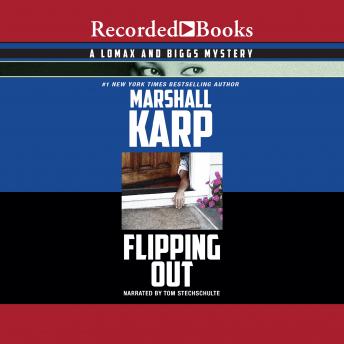 TV producer and bestselling author Marshall Karp is the mastermind behind this suspenseful and uproariously funny mystery series. Working on southern California's highest profile homicide cases, detectives Mike Lomax and Terry Biggs get the job done, bickering and arguing all the way. Who would want to murder bubbly event planner Jo Drabyak? This charming young lady seemingly had no enemies. The only lead Lomax and Biggs have to work with is a new business venture Jo had entered into with a group of fellow officers' wives. They "flip" old houses-renovate them, then sell them for a profit-in conjunction with a bestselling mystery author who features the property in her latest novel. Now the other wives-including Terry's wife Marilyn-fear they could be the next target. Karp's fan-favorite detectives keep the laughs coming, but these two aren't Keystone Cops. Tom Stechschulte returns for this third installment giving voice to two of the genre's hottest sleuths

This title is due for release on May 8, 2009
We'll send you an email as soon as it is available!