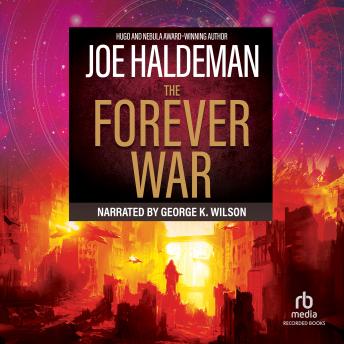 When it was first published over 20 years ago, Joe Haldeman's novel won the Hugo and Nebula awards and was chosen Best Novel in several countries. Today, it is hailed a classic of science fiction that foreshadowed many of the futuristic themes of the 1990s: bionics, sensory manipulation, and time distortion. William Mandella is a soldier in Earth's elite brigade. As the war against the Taurans sends him from galaxy to galaxy, he learns to use protective body shells and sophisticated weapons. He adapts to the cultures and terrains of distant outposts. But with each month in space, years are passing on Earth. Where will he call home when (and if) the Forever War ends? Narrator George Wilson's performance conveys all the imaginative technology and human drama of The Forever War. Set against a backdrop of vivid battle scenes, this absorbing work asks provocative questions about the very nature of war.

well it's an award winning novel.... but there narrator makes the story really stand on another level

I found the narrator to be pleasant to listen to with his inflections and voice changes from time to time to fit the narrative. The book was a fun listen as well. Gets you thinking about certain scientific things.

This book is a great piece of speculative fiction. Obviously dated by its ideas about the future, it has a lot of timeless questions too, such as meditations of xenobiology, xenolinguisitcs, and the complete randomness of interstellar combat.