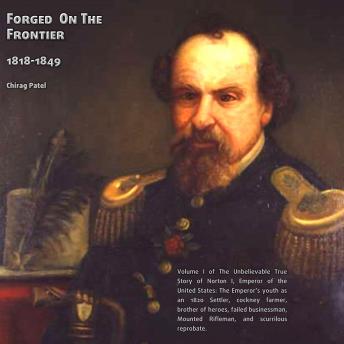 Forged On The Frontier (1818-1849): The Emperor’s youth as an 1820 Settler, cockney farmer, brother of heroes, failed businessman, Mounted Rifleman, and scurrilous reprobate

A wryly humorous telling of the British colonialisation in South Africa, told from the point of view of a not-very-successful family and the child that would become Emperor, thousands of miles away.Long before he became Emperor of the United States, Joshua Norton won his place in history as one of the 1820 Settlers, in the British colonialisation of the Cape Colony, in today's South Africa.Many think the patron saint of Discordianism a myth, or his life absurdly exaggerated, but they are wrong. Reality is far stranger than fiction could ever be, and Joshua Norton is the absolute proof, a real-life Don Quixote formed in tragedy and triumph, scarred into a delusion of a better world by the violence of this one.

This volume covers Joshua's upbringing as an 1820 settler in the newly-formed Albany region, in what would become the Eastern Cape. It brings to life one of history's most turbulent periods, as Dutch, British, Xhosa, Khoi and Fingo all try to build a life on a land riven by constant war.

Read on for a tale of heroes and villains, but mostly of people trying to survive where they can when all the odds are stacked against them and great political winds tear through their desperate lives.

The first volume of the definitive history of Norton I, Emperor of the United States and Protector of Mexico. Told with with a wry dramatisation, it contains the most accurate and complete information on Joshua's early life in any book to date.

Forged On The Frontier (1818-1849): The Emperor’s youth as an 1820 Settler, cockney farmer, brother of heroes, failed businessman, Mounted Rifleman, and scurrilous reprobate

This title is due for release on March 24, 2021
We'll send you an email as soon as it is available!