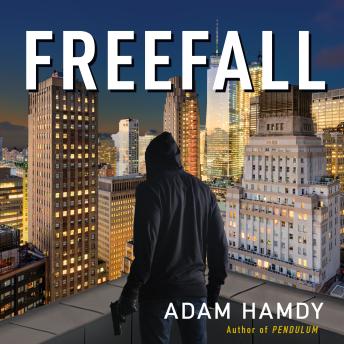 Adam Hamdy's debut novel, Pendulum, was touted as 'one of the best thrillers of the year' by James Patterson. John Wallace returns in Freefall and must figure out who he can trust in this high-octane sequel.
Eight months after confronting the Pendulum killer, John Wallace is losing himself in a dangerous warzone in a misguided attempt at penance for the deaths that he believes he caused. But an assassination attempt leads Wallace to realize that he has once again been targeted for death. This time, Wallace is prepared and, tracking down his would-be assassin, he discovers a link to his nemesis, Pendulum.

That link is the missing piece of a puzzle that has tormented FBI agent Christine Ash ever since they confronted Pendulum, but with no Bureau support, she has been unable to pursue her case. Wallace's proof puts her back on the trail, but it also exposes them both to terrible danger.

Confronted by a powerful, hidden enemy, Ash and Wallace must overcome impossible odds if they are to avert a dangerous challenge to the networked world that threatens to destroy our entire way of life.