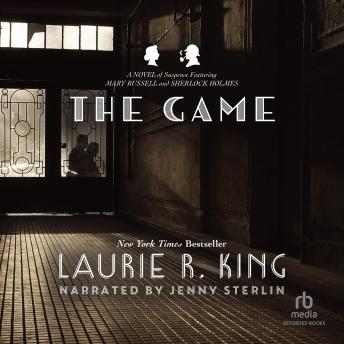 The Game: A novel of suspense featuring Mary Russell and Sherlock Holmes

It's only the second day of 1924, but Mary Russell and her husband, Sherlock Holmes, find themselves embroiled in intrigue. It starts with a New Year's visit from Holmes's brother Mycroft, who comes bearing a strange package containing the papers of an English spy named Kimball O'Hara-the same Kimball known to the world through Kipling's famed Kim. Inexplicably, O'Hara withdrew from the 'Great Game' of espionage and now he has just as inexplicably disappeared. When Russell discovers Holmes's own secret friendship with the spy, she knows the die is cast: she will accompany her husband to India to search for the missing operative. But Russell soon learns that in this faraway and exotic land, it's often impossible to tell friend from foe-and that some games aren't played for fun but for the highest stakes of all.life and death.

the Game I like good story and this is extra good stroy.The stroy was complex with great chactors. Mary Russel and Sherlock Homes sericekeepyou interested and waiting for the next book.I real enjoy having the same narrator for a serice

This title is due for release on July 18, 2008
We'll send you an email as soon as it is available!