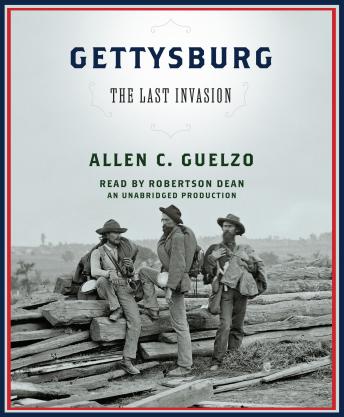 From the acclaimed Civil War historian, a brilliant new history—the most intimate and richly readable account we have had—of the climactic three-day battle of Gettysburg (July 1–3, 1863), which draws the reader into the heat, smoke, and grime of Gettysburg alongside the ordinary soldier, and depicts the combination of personalities and circumstances that produced the greatest battle of the Civil War, and one of the greatest in human history.

Of the half-dozen full-length histories of the battle of Gettysburg written over the last century, none dives down so closely to the experience of the individual soldier, or looks so closely at the sway of politics over military decisions, or places the battle so firmly in the context of nineteenth-century military practice. Allen C. Guelzo shows us the face, the sights, and the sounds of nineteenth-century combat: the lay of the land, the fences and the stone walls, the gunpowder clouds that hampered movement and vision; the armies that caroused, foraged, kidnapped, sang, and were so filthy they could be smelled before they could be seen; the head-swimming difficulties of marshaling massive numbers of poorly trained soldiers, plus thousands of animals and wagons, with no better means of communication than those of Caesar and Alexander.

What emerges is an untold story, from the trapped and terrified civilians in Gettysburg’s cellars to the insolent attitude of artillerymen, from the taste of gunpowder cartridges torn with the teeth to the sounds of marching columns, their tin cups clanking like an anvil chorus. Guelzo depicts the battle with unprecedented clarity, evoking a world where disoriented soldiers and officers wheel nearly blindly through woods and fields toward their clash, even as poetry and hymns spring to their minds with ease in the midst of carnage. Rebel soldiers look to march on Philadelphia and even New York, while the Union struggles to repel what will be the final invasion of the North. One hundred and fifty years later, the cornerstone battle of the Civil War comes vividly to life as a national epic, inspiring both horror and admiration.