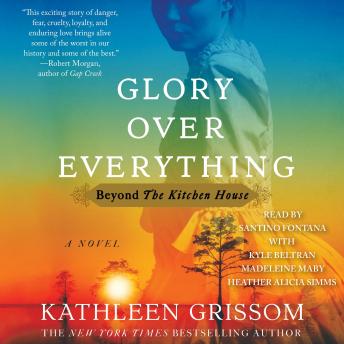 Glory over Everything: Beyond The Kitchen House

The latest New York Times bestseller from the author of the beloved book club favorite The Kitchen House is a heart racing story about a man’s treacherous journey through the twists and turns of the Underground Railroad on a mission to save the boy he swore to protect. Glory Over Everything is “gripping…breathless until the end” (Kirkus Reviews).

The year is 1830 and Jamie Pyke, a celebrated silversmith and notorious ladies’ man, is keeping a deadly secret. Passing as a wealthy white aristocrat in Philadelphian society, Jamie is now living a life he could never have imagined years before when he was a runaway slave, son of a southern black slave and her master. But Jamie’s carefully constructed world is threatened when he discovers that his married socialite lover, Caroline, is pregnant and his beloved servant Pan, to whose father Jamie owes his own freedom, has been captured and sold into slavery in the South.

Fleeing the consequences of his deceptions, Jamie embarks on a trip to a North Carolina plantation to save Pan from the life he himself barely escaped as a boy. With the help of a fearless slave, Sukey, who has taken the terrified young boy under her wing, Jamie navigates their way, racing against time and their ruthless pursuers through the Virginia backwoods, the Underground Railroad, and the treacherous Great Dismal Swamp.

“Kathleen Grissom is a first-rate storyteller…she observes with an unwavering but kind eye, and she bestows upon the reader, amid terrible secrets and sin, a gift of mercy: the belief that hope can triumph over hell” (Richmond Times Dispatch). Glory Over Everything is an emotionally rewarding and epic novel “filled with romance, villains, violence, courage, compassion…and suspense.” (Florida Courier).

Intriguing sequel! I couldn’t stop reading/listening. I have already bought the two books for others. The fictional accounts of Lavinia, Belle, Henry, Jamie and Oan rival anything I’ve ever read about the era. I really did care about these characters, their struggles and destinies.

Great Read/listen! Especially enlightening with what has been going on in the Charlottesville....one never knows what another persons life is until you walk in their shoes. And since that is impossible....Literature

Loved everything about this book! I knew The Kitchen House would be very hard to sequel, but Glory does not disappoint.

Great follow up to The Kitchen House! I loved it! I got them back to back and it was just the best!

I love the narrative of his book as you can submerge yourself in the story quickly. I also love how it is told from different perspectives.

I loved The Kitchen House and while this one wasn't as good, it is still worth reading.

I enjoyed this book even more than The Kitchen House

Amazing!!! I didn't want to stop listening. Had me exclaiming out loud! Loved it.