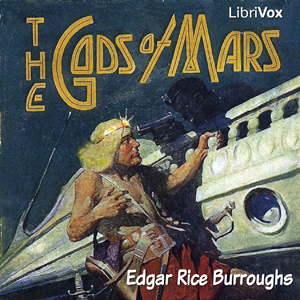 The Gods of Mars

The protagonist, John Carter, with his proficiency in hand-to-hand combat and flirtations with beautiful alien women, could be said to have set the mold for later influential icons like Captain James T. Kirk and James Bond.

At the end of the first book, A Princess of Mars, John Carter is unwillingly transported back to Earth. The Gods of Mars begins with his arrival back on Barsoom (Mars) after a ten year hiatus, separated from his wife Dejah Thoris, his unborn child, and the Red Martian people of the nation of Helium, whom he has adopted as his own. Unfortunately, John Carter materializes in the one place on Barsoom from which nobody is allowed to depart: the Valley Dor, which is the Barsoomian heaven. (Summary from wikipedia)"

awesome book! but the narrator sucks

A great classic. Absolutely criminal to have this narrator. Mispronunciations, dull reading, obviously not read ahead. They should be ashamed!

Couldn’t get through the first chapter. The narrator reads it instead of narrates. Sounds like a college freshman trying to do an oral report written by his roommate.

I will definitely be listening through this series of books. It's another book I've neglected in the past.

Sounded like a volunteer read the book. That considered, he did an OK job. Keeping in mind this was written before Star Wars, Star Trek, and inspired any number of writers, it was pretty good.

I enjoyed this and was very entertained

The story is very well written. I particularly liked the changes in location, and the unique turns of phrase.. The narration was awful. There is NO "X" in the word "escape"! That was the chronic problem that had me gritting my teeth. It wasn't helped by the hundred odd other mispronunciations. Timing also should be established by the punctuation, which the narrator quite continually disregarded. Science fiction works through our wilful suspension of disbelief. A good narrator puts you right into the story, while poor narration can't quite get you to suspend your disbelief. A shame, really.

great job with a challenging read but it's "escape" not "excape"

This is an Amazing listen! I love the timing in the telling if this story. In the writing of the story it answers all questions.