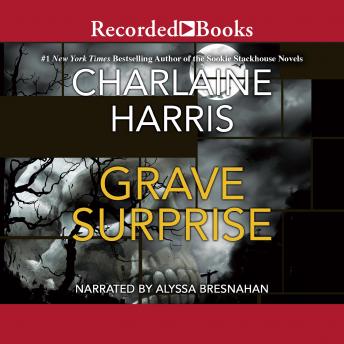 Southern mystery writer Charlaine Harris is the New York Times best-selling author of Grave Sight and the Sookie Stackhouse series. Supernatural curiosities, finely wrought characters, and unpredictable plotting combine in this exciting whodunit. Twenty-something Harper Connolly has a gift. After being struck by lighting as a child, she discovered an eerie ability to locate the deceased. In Memphis, skeptical Professor Nunley wants her to demonstrate that skill at an ancient cemetery. There, Harper stands atop a grave and says there are two bodies entombed: one centuries old, but the other, a young girl named Tabitha. Her assertion holds water. Tabitha has been missing for two years-and now the police are suspicious of Harper. So with her loyal stepbrother Tolliver, Harper begins to amass clues that will solve the case. Harris' expert pacing builds the suspense as two young sleuths navigate a string of strange occurrences that has others scratching their heads. Narrator Alyssa Bresnahan's careful reading makes this novel a sumptuous treat for mystery fans.

Very good. Enjoyed the story and it was well narrated.

This is the second book in the Harper Connelly series. It's good mystery that keeps you guessing. I read the Midnight, Texas series before this series so I was surprised to find that Manfred Bernando was introduced in this book.

This is the 2nd book of this series that I have read, it’s as good as the first one. The Narrator is excellent

Another great read. Love this saga. Another 5 star rating for the author and narrator.

Not excessively vulgar, but unnecessary use of the F word and I don’t like the direction the author seems to be going with the Harper and Tuliver.

I simply could not stop listening. One of the best I've listened to.

I really enjoyed this book. It was very good. Kept me guessing. I loved the narrator. She did a great job!

This title is due for release on July 18, 2007
We'll send you an email as soon as it is available!