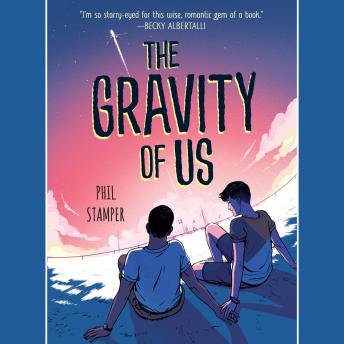 The Gravity of Us

As a successful social media journalist with half a million followers, seventeen-year-old Cal is used to sharing his life online. But when his pilot father is selected for a highly publicized NASA mission to Mars, Cal and his family relocate from Brooklyn to Houston and are thrust into a media circus.

Amidst the chaos, Cal meets sensitive and mysterious Leon, another 'Astrokid,' and finds himself falling head over heels--fast. As the frenzy around the mission grows, so does their connection. But when secrets about the program are uncovered, Cal must find a way to reveal the truth without hurting the people who have become most important to him.

Expertly capturing the thrill of first love and the self-doubt all teens feel, debut author Phil Stamper is a new talent to watch.

it was really good

The story is cute, the lead charater can be a little annoying from time to time, but it didn't bother me too much. The plot is nice and flowing, but overall the relationships and the ending doean't feel authentic. The narrator is good, I liked the way he express emotions.