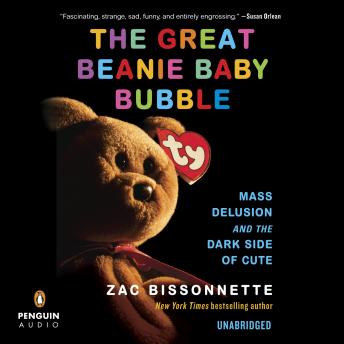 The Great Beanie Baby Bubble: Mass Delusion and the Dark Side of Cute

In the annals of consumer crazes, nothing compares to Beanie Babies. In just three years, collectors who saw the toys as a means of speculation made creator Ty Warner, an eccentric college dropout, a billionaire—without advertising or big-box distribution. Beanie Babies were ten percent of eBay’s sales in its early days, with an average selling price of $30—six times the retail price. At the peak of the bubble in 1999, Warner reported a personal income of $662 million—more than Hasbro and Mattel combined.


The end of the craze was swift and devastating, with “rare” Beanie Babies deemed worthless as quickly as they’d once been deemed priceless.


Bissonnette draws on hundreds of interviews (including a visit to a man who lives with his 40,000 Ty products and an in-prison interview with a guy who killed a coworker over a Beanie Baby debt) for the first book on the strangest speculative mania of all time.