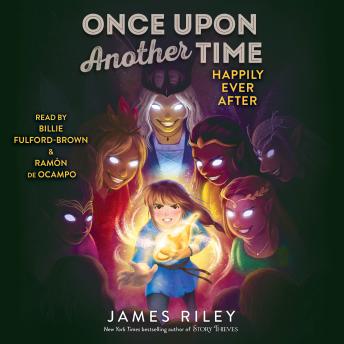 #3 of Once Upon Another Time

The third and final book in a new trilogy of twisted fairy tales from New York Times bestselling author James Riley, set in the world of his popular Half Upon a Time series, that’s perfect for fans of Fablehaven and Chris Colfer’s A Tale of Magic series!

Who doesn’t love a good Happily Ever After? The Cursed City is now the Blessed City, with its residents’ curses removed. Lena is now fully human, as are the rest of the giants, and together they live in peace with all the other humans in the city, all their differences now gone. And sure, Jin might have disappeared, but really, genie magic only caused trouble.

At least, that’s what the magic spell in Lena’s head is telling her. But somewhere inside, she knows that this new world isn’t right, that no real Happily Ever After would take her giant heritage from her…and that Jin is in danger.

When things are at their darkest, can a single Spark light the way?

This title is due for release on May 30, 2023
We'll send you an email as soon as it is available!