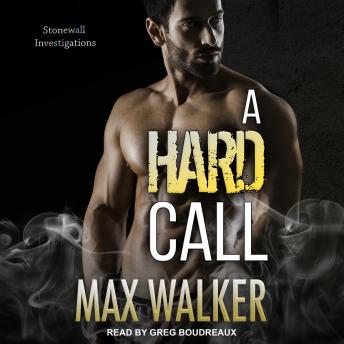 Zane Holden hasn't had the easiest go of things. His childhood was rough and adulthood hasn't been a walk in the park either. The only good thing in his life would be Stonewall Investigations, an investigative company he found to work primarily with the LGBTQ community. Things were ok and Zane was finally healing from a personal tragedy but the reemergence of a serial killer turns his world upside down.

Lorenzo De Luca is a cocky defense attorney dripping in Italian charm. He's well known as one of the best lawyers in New York City, a title he worked hard to achieve. When he picks up a difficult case, he finds that he needs extra help. This leads him to Stonewall, where he meets Zane for the first time and instantly feels himself falling for the mysterious and stone-cut detective.

The two men have their own hangups to work through, but both men are having a hard time denying the connection between them, even though they're trying.

When fate insists on pushing them together, Zane and Enzo give in and start exploring their feelings. They'll need to balance their budding relationship with the stress of Enzo's case, which takes them both on a twisting journey toward the truth, all while a bigger threat looms on the horizon.

Good story with a balance of romance/sex and detective/action. Good narration too. Leaves you wanting to know more about what happens to Zane and Enzo.