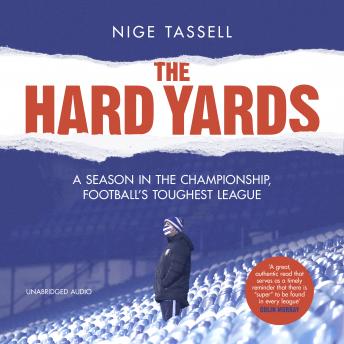 The Hard Yards: A Season in the Championship, England's Toughest League

On the final day of the 2019/20 season, only four clubs in the Championship, England’s second tier of soccer, had nothing to play for, everyone else was fighting for promotion or survival. It’s stats like this that give the league its well-deserved reputation as the most exciting league in football. Anything can happen, and often does.

In The Hard Yards, Nige Tassell tells the Championship’s stories, uncovers its hidden gems and takes the reader on an entertaining and eye-opening tour of the 2020/21 season. Following three clubs in particular – newly promoted Wycombe Wanderers, newly relegated Bournemouth and stalwarts Sheffield Wednesday, who start the season on 12-point deficit – he’ll dip into the seasons of clubs across the league, interviewing managers, fans, kit men and chairmen. A world away from the glamour and melodrama of the Premiership, the Championship is the heart and soul of football and in The Hard Yards Nige Tassell will take it back to basics.

Praise for The Bottom Corner:
‘Warm and celebratory but also sharp and insightful, The Bottom Corner is a love letter to non-league football that is also a vivid snapshot of its place in our national life’ -- Stuart Maconie

‘A wonderful journey through life in the lower reaches of the football pyramid. A fascinating tale of a very different world of football from that of the overpaid stars of the television age’ -- Barry Davies

This title is due for release on August 26, 2021
We'll send you an email as soon as it is available!