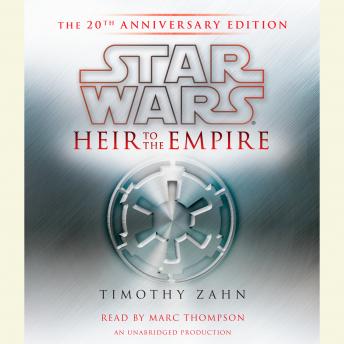 Here is a special edition 20th anniversary release of the #1 New York Times bestselling novel that reignited the entire Star Wars publishing phenomenon—unabridged for the first time. The biggest event in the history of Star Wars books, Heir to the Empire follows the adventures of Luke Skywalker, Han Solo, and Princess Leia after they led the Rebel Alliance to victory in Star Wars: Episode VI Return of the Jedi.

Five years after the Death Star was destroyed and Darth Vader and the Emperor were defeated, the galaxy is struggling to heal the wounds of war, Princess Leia and Han Solo are married and expecting twins, and Luke Skywalker has become the first in a long-awaited line of new Jedi Knights.

But thousands of light-years away, the last of the Emperor’s warlords—the brilliant and deadly Grand Admiral Thrawn—has taken command of the shattered Imperial fleet, readied it for war, and pointed it at the fragile heart of the New Republic. For this dark warrior has made two vital discoveries that could destroy everything the courageous men and women of the Rebel Alliance fought so hard to create.

The explosive confrontation that results is a towering epic of action, invention, mystery, and spectacle on a galactic scale—in short, a story worthy of the name Star Wars.

Wish they used this instead of the new trilogy

Correction! This is the 10th anniversary of this book. There's no way I'm that old!

For sure will continue with the next installment of this series. I love hearing the suspenseful audio comes in and out throughout the novel.

Amazing. Love imagining this being the alternative to the sequel thrilogy that we got from Disney.

Excellent extension on the original trilogy. Puts some of the side characters like Tron in perspective and puts them in the frame of the larger story.

This is a production! It sounds like and feels like a 10 hour long radio drama. The story line is top notch as all Zahn Star Wars is, and Thompson brings it to life.

Phenomenal! One of the best SW books of all time. Only other books to compete are the other Thrawn books by Timothy Zahn and read by Mark Thompson. With the third Thrawn trilogy set to come out in October of this year (2020) we have so much to look forward too!

Absolutely an amazing book! The story moved quickly it was riveting!

This book was truly awesome. It will always be my true sequel to star wars VI

I enjoyed it. It's a decent story but a tad bit underwhelming.

Marc Thompson is an amazing narrator and this book is the first in a wild three book series. Star Wars!!

Definitely one of my favorite novels from the old EU. The Narrator does an excellent job making the work come alive, especially with the sound effects and the music. If you have never read HTTE, this is a great way to get to know. If you have, then revisit it in style with this audiobook. Thank you Timothy Zahn and Marc Thompson and Audiobooks.com.

Whenever me my friends talk about Star Wars and the expanded universe, these books are the finest examples and my personal favorite in terms of story telling and why the old EU is such an awesome, fleshed out and amazing continuity. From the stellar voice acting to the awesome and iconic sounds and amazing story, the Thrawn Trilogy is easily one of the best an most well written of the Star Wars EU and I couldn't recommend them more!