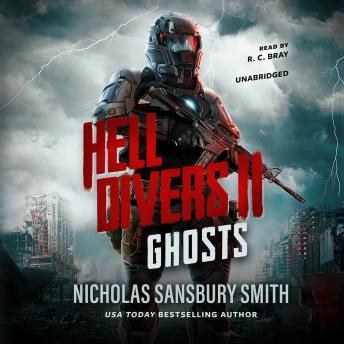 #2 of The Hell Divers Series

Betrayal and sacrifice in the skies …

Ten years ago, Hell Diver Xavier “X” Rodriguez fell to Earth. Those he left behind went on without him aboard the airship he once called home. Michael Everhart—the boy once known as Tin—has grown into a man and the commander of Hell Diver Raptor Team. While Michael dives to help keep the Hive in the air, Captain Leon Jordan rules with an iron fist at the helm of the ship. But unrest stirs under his strict leadership as a prophecy of hope sweeps the lower decks.

When a mysterious distress signal calls the Hell Divers to the surface, Michael and his loyal team begin to uncover long-buried truths and the secrets Captain Jordan will do anything to keep. They dive so humanity survives … but will they survive the ultimate betrayal?

A great sequel to a great sci-fi book!!

With the way Book 1 ended, I had to jump right into Book 2. Set 10 years later, the book keeps us in suspense as to what ultimately happened to X from Book 1. While that question was in the back of my mind, I got caught up with Tin, who’s real name is Michael Everhart. He’s now a young man, considered a full experienced adult in this post-apocalyptic society. The Hive airship is still flying. Yet things haven’t been all rosy these past years. It’s been one emergency after another. Captain Leon Jordan handles some of these emergencies well and others not so much. As the pressure builds, he makes more and more mistakes. Once again, the action keeps this book moving along at a swift clip. I worried over this character or that one and was on the edge of my seat for the entire book. Michael is a great character to follow. He’s become a Hell Diver (like his dad and like X). I was glad to see that Layla was still a significant part of Michael’s life. I love that they work as a team and there’s no ridiculous chauvinistic chivalry from Michael and no fainting flower silliness from Layla. These two are a great hero duo. There’s a canine companion, Miles, in this book which makes life bearable for a certain character. Yay! Of course, there were several times where I worried about the dog’s safety. No fears! The dog makes it through this book. Captain Jordan is not a good person. I think he once was, but the constant pressure since he assumed control (after Cpt. Ash succumbed to cancer) has brought out the worst traits in the man. I think Katrina, who was once X’s lover, has tried her best to keep Jordan level-headed. I knew Jordan had gone to the dark side when he removed the ship’s historical artwork from the hallways. Bad move! Hell Diver Magnolia is back in this book but early on I worried if she would make it through this book alive! Her accident acts as a catalyst for Michael and his Hell Divers to break some rules. She’s got some of the best lines in the book. All told, this is a worthy sequel to Book 1. I found it just as enthralling. 5/5 stars. The Narration: R. C. Bray continues to do this series justice. I liked his grown up voices for Tin (Michael) and Layla, who were kids in Book 1. He had the perfect voice for jerk captain Jordan as well. His female characters sounded feminine and each character had a unique voice. The pacing was perfect as well. 5/5 stars.

great book, kept my on the edge of my seat. keep up the good work.

Really enjoyed this book cant wait for the next one

oh my god, i freaking love it got me so eager for the the third book, i can't wait to see what happened. the narrator doing a god damn good job on it that it feels like his x and telling his stories from the book and pulling me in deeper then if i was to read it.( i didnt stop at book 1 i keep going to book 2 to which I know it doesn't make sense here because X isn't in a lot in book 2 but to me it feel like the same book so this be the same review)

Great book, I am really look in forward to the next one.